Did You Lay Your Life Down for Christ this Christmas?

I am admitting right here and now that if Christmas were only about Santa Claus and toys under a decorated fir tree (that should really still be standing in a forest somewhere as a home to woodland creatures), then I would have surely received a grade of A+ for my effort this past week.  However, Christmas really means that we are remembering God coming to his people tangibly as a baby in a manger in Bethlehem and how He came to this world to save us.  If I were to receive a grade for how well I did to keep that as the forefront of my family's minds,  then I probably would receive a grade of D - maybe F - this year.  Let's face it, it is tough to keep things in perspective all the time with society moving farther and farther away from the knowledge that we were created by The One who called himself "I am who I am."  He is existence.  He created us.  We exist because of Him.  We are supposed to give Him glory in all we do - all the time - 24/7.  The one time of year that we celebrate His earthly existence and His gift to us to come and save us, we spin it as the time of year to put pretty lights up, put reindeer antlers on our cars, wear red and green as much as possible (so much so that you don't want to see another red or green article of clothing until next Christmas), and as I heard so often this year...a time to be nice and to "give".

I am no theological genius, but I think we're supposed to be nice all the time - not just this time of year.  And I think we're supposed to be giving all the time.  And how much giving really takes place at Christmastime?  I do know there are many people who give of their time to help feed and clothe the hungry and poor, but "many" people isn't "most" people...and it certainly isn't "all" people.  We also bake like the end of the world is coming for people who usually say, "I'm trying to watch my calories".  We have even perverted this sense of giving to mean giving lots and lots and lots of toys to children who already have lots and lots and lots of toys.  We have perverted it to mean giving more stuff - that we don't need and probably wouldn't buy for ourselves - to people who already have lots of stuff.  How much stuff do we really need?  My house is so loaded with stuff from twenty three years of marriage and four children, that I am constantly in a frenzied state of "can we give this away? well, how about this?  and why do we still have this???"

Before Christmas this year, I had wanted so badly to really focus on the meaning of Christmas and teach my children how to as well.  I began our Advent season with the best of intentions.  I decided I would buy presents for the kids early and online, thus freeing me up for quality time with my children, snuggling, reading to them, baking with them, taking walks with them, etc.  My online order from "Name Withheld" was royally messed up and was given a shipdate of February.  February!!!  And I didn't even notice that until the week before Christmas when nothing had arrived yet.  Needless to say, I canceled my order.  So, amidst planning and preparing for my seven year old's beach-themed birthday party (two days before Christmas), I had to now find time to figure out how to get the bottom of our tree loaded up on Christmas morning.  This all meant my mind was not on Christ.  My eyes were not fixed on our Lord.  My heart was not pounding for joy at the impending birth of our Savior.  My heart was pounding at the thought of pulling off a birthday party at our home, as well as entertaining and cooking for our extended family Christmas Eve, and then making sure I had bought and wrapped enough presents for our children to open Christmas morning so that there would be no long faces.

To exacerbate my guilt over not celebrating the true meaning of Christmas, the Newtown massacre happened.  That is a day I will NEVER forget, nor will I get past it.  Like the parents of those beautiful children, I too have a first grader whom I love more than my own life.  The Christmas frenzy stopped that day.  I spent the day with my children - hugging them, kissing them, and trying to imagine my life if I were one of those Newtown parents.  How would I cope?  How would I continue on?  How would I ever forgive?  (A topic I recently wrote about and you can read here:  How Do I Forgive? )  I have done a lot of crying for the Newtown families and their tremendous losses and pain.  I grieve for the parents and families.  I grieve for the teachers and their families.  The ones who survived have scars that will remain on their hearts for the rest of their lives.  As a former teacher, I went through all the emotions and thoughts of "what if that had been me?"  What if that had happened when I was teaching?  Would I have lunged at the gunman?  Would I have frozen in fear? I want to say I would have gallantly tried to save my children's lives before my own - I think I would have - but I don't know.

It's impossible to try to imagine what one would do in the same horrific and unforeseen situation.  I do remember teaching when 9/11 happened and how I went into "lioness mode".  Muhammed Atta lived in our city for heaven's sake.  There was fear in our city that day - a lot of rumors and speculation... and fear.  I remember going through my mind in a split second how I could get my kids out of our classroom to safety while trying to get my own son from his kindergarten room at the same time.  My heart was split that day - between my "kids", as I called them, and my own son downstairs in a different room.  I remember thinking that as long as he was safe, that's all that would matter.  I would give my life for my students and my son - their lives were greater than mine.  The teachers, administrators, and staff who perished in Newtown are national heroines.  Their names should be learned by all.  Their stories should be told.  They gave their lives defending the lives of innocent children.  Of course, that kind of giving is the ultimate giving - the ultimate sacrifice - that we would lay our lives down for another.

God asks us to lay our lives down for Him everyday.  We haven't been doing a good job of it.  If we were, we wouldn't have the high numbers of mentally ill people unable to get adequate medical care. We wouldn't have guns so readily available to just anybody at any time - a piece of machinery that can take another's precious life with one movement.  We wouldn't be mass producing extremely violent  video games for our boys and evil monstrous dolls for our girls and then wrapping them in Frosty the Snowman paper to be tucked gently under bejeweled fir trees.  We wouldn't be forgetting our human brothers and sisters who need our love and support the whole rest of the year.  We wouldn't advocating and protecting (under the guise of choice) the violent death of millions of babies in the womb every year.  We wouldn't be focusing our daily lives on emulating Hollywood or Housewives of Wherever or Jersey Shore or ANYONE other than Christ.  As Christians, we have a duty to live our lives the way God has commanded us to live it.  Did everyone forget about the Ten Commandments?  Yeah, they weren't gentle reminders...they were COMMANDMENTS.  And as I have said before, God's kingdom is not a democracy, it is a kingdom.

Ugggggghhhhh.  Next year will be better.  I am vowing that next Christmas, our family's eyes will be set on waiting to see that tiny baby placed in the manger on Christmas Eve.  I am vowing that the focus of our year will be Christ's life, passion, death, and resurrection.  It is the ONLY thing that is important in this life.  He placed Himself inside - what is supposed to be - the safest place on the planet; a mother's womb.  He came to His people as a baby to a family of humble means so that we may understand Him more - we may relate to Him completely as one of us.  He wants us to know He understands our pains, our sufferings, our joys, our loves, and our responsibilities.  He did all that for us - the ones He created to enjoy in His creations.  What are we doing for Him?  How are we serving Him daily?  Reach out to others.  Spread His love.  Spread His joy.  Be a Christian witness to others.  If you have God at the center of your heart, how can you be anything but joyous?  Others will see your joy and will want it.  Teach others Christ's teachings.  Instruct others in the ways of the Church He set into motion with the sacraments and Peter as its first Pope.  If you don't know the ways of His Church, then begin this new year in educating yourself.  For as St. Jerome said, "Ignorance of the Scriptures, is ignorance of Christ."  Our world needs the witness of Christians - specifically Catholics.  We are a broken, Godless, misguided, and hurting world.  Only Christ and His Church have the ability to heal.  Wear your Christianity on the outside for all to see.  Witness for Christ and be willing to lay your life down for Him.  He layed His life down for us.
Posted by Katherine No comments: 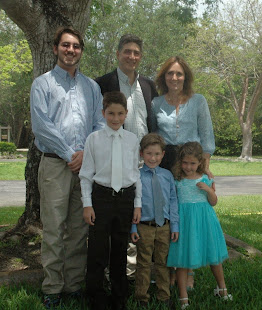 "For God did not give us a spirit of timidity but a spirit of power and love and self-control." 2Timothy:7

House a disaster? Kids' hair on fire? Need to return to this blog? Email it!